The investing public tends to be a very impatient crowd. They do not seem to want to wait for anything. This is especially apparent when the market is working out a trading range. This process always takes time. When it follows the climaxing of an important advance or decline as the current trading range does, the time factor will almost always be measured in months especially when the preparation underway has characteristics of accumulation. Therefore, it is not surprising the two recent attempts to get an advance going that were probably the result of impatience failed to produce the desired results.

During the week of November 2, a rally attempt was made that had a large number of people very excited. This is it, they thought, and jumped aboard in substantial numbers. What they failed to realize was that the rally was beginning with the market in a position that was much closer to being overbought than oversold. Consequently, when the upside progress began, the market very quickly became overbought. As soon as it did, the rally was over. The market than began to slip back down.

Althought the early November rally did not live up to the general expectation, it did produce a very important positive result. That was the beginning of a pattern of increased volume on rallies and decreased volume on reactions. If the market in going to make a important advance, this pattern is a significant step in that direction.
This week, the crowd tried the same type of action again and again it has failed to produce the desired result.
The reason is partly the same as that which produced the previous week's failed. This time, however, there is an additional reason, which is potentially very important. The action from the selling climax through the end of the rally on November 5 produced the basis for defining an apex. The failed of this week's rally to get anywhere can be traced to a premature encounter with the supply line of the apex.

It might seem as through the only undetermined point about the next important move is the timing. While it is true that the action to this point in the trading range has appeared positive, there are still negative possibilities. The most notable of these involves the apex and the supply line. We know that there is a tendency for apexes to be broken in the direction of the previously established trend. We also know that in this case that trend is down. If we combine these facts, the results is a continued move toward the supply line for a while that will be followed by a break on the downside and a resumption of the down trend. The action within the trading range to this point does not seem to favor this scenerio, but until that supply lin is broken it remains a possibility and is reason to be very cautious about establishing new long positions.

There are three stocks that lend themselves to a cautious approach to the market. They are UAL, Inc., Merrill Lynch, and Pittston. Last month, Merrill Lynch and Pittion have had, but it has some factors that may prove to be as important. A casual comparision of the UAL chart and the Wyckoff Wave chart would seem to suggest that they are very much in harmony. A closer look, through, reveals some important differences. One is that UAL has already broken its down trend. Therefore, it should not have to expend valuable energy breaking an important supply line as will the general market. The means that when the market begins to move, UAL should be able to move with less difficultly. The action of the past two weeks seems to confirm this.

Another very important development in this stock was the spring action of about two weeks ago. In doing this, UAL made a supreme effort to break the bottom out of its trading range. It tested the downside waters and found them not to its liking. This gives us positives indications about UAL that we do not have about the general market.

The market has tested, but it has not put its support line to the ultimate test. This factor plus the earlier breaking of the down trend make this stock at least as strong and perhaps stronger than the general market.

If UAL is to be bought, the place to do it is between 18.4 and 19.0 on relatively low volume at a time when the general market has become oversold. Althought it is too early to actually take an upcount, we can look ahead to what it might be. It may eventually be taken at the nineteen level. If so, it will indicate at least a potential move of eight points. That added on to the low of seventeen suggests a move to twenty-five, which would be a advance of over thirty percent.

The situation in MER and PCO is substantially different from that of UAL. These two stocks have shown consistent and impressive relative strength since the day the market climaxed. It is this that makes them potential candidates. At present, they both appear to be resting after their recent gains. Merrill Lynch appears to be the stronger of the two stocks. Pittston has had a larger gain, but Merrill Lynch has done a better job of holding on to its uptrend. There was a penetration of the support line last Friday, which may be a warning of an impending end to the present short term uptrend. This is especially true if the stock continues to be stopped around 37.4. This would seem to say that there is a need for a correction, which could come asan extended period of horizontal action, a retreat toward the halfway point of the last upward thrust at 34.7, ora correction of the entire advance to about 32.1.

In view of the relative strength in the stock, the fact that the first phase of the move was corrected previously, and the condition of the general market, a return to the thirty-three area is probably the least likely possibility. Should the general market become oversold very quickly, MER could become a buy without a substantial period of correction either horizontal or downward. The objective range for this stock remains 39 to 43, but the confirming count that is building between thirty-six and thirty-seven is beginning to favor the middle and upper half of that range.

Pittston has been correcting its earlier gains for almost four weeks. Thus far that correction has been primarily a horizontal action. Unfortunately, the most recent action has penetrated the support line of the previously defined uptrend and has thus eliminated the possibility of the stock being able to use this support as a springboard to additional gains.

The breaking of the short term uptrend is a disappointment, but it could be replaced by anewand longer term uptrend once the current corrective phase has been completed. The questions now are how long that will take and what will happen to the price of the stock between now and then. For an answer to the question about how long, we should look to the general market and the development of an oversold condition in it. As to what may happen to the price between now and then, the answer is less clear.

The first thrust of the advance took the price to 28.2. This was followed by a move down to 25.1, which can be seen as a very constructive correction of the prior rally. Since then there has beena secondary trading range in effect between twenty-five and twenty-eight. If this reasoning is sound, itis possible that the price could return to the bottom of the new trading range before the advance would be renewed. A spring action on the support at twenty-five would be a good way to get an advance going again.

The Pulse of the Market 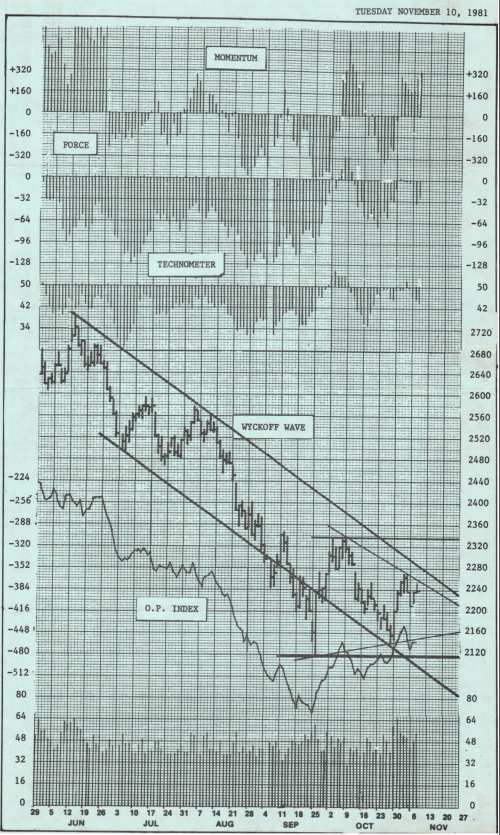 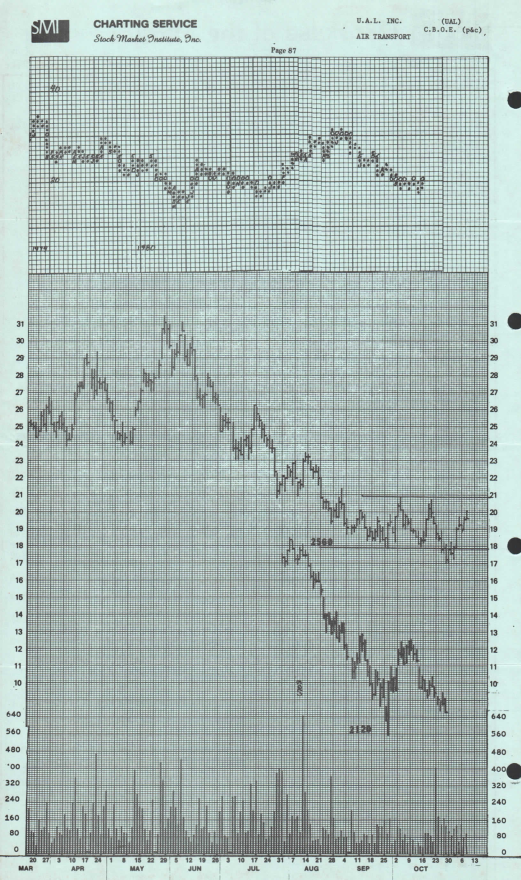 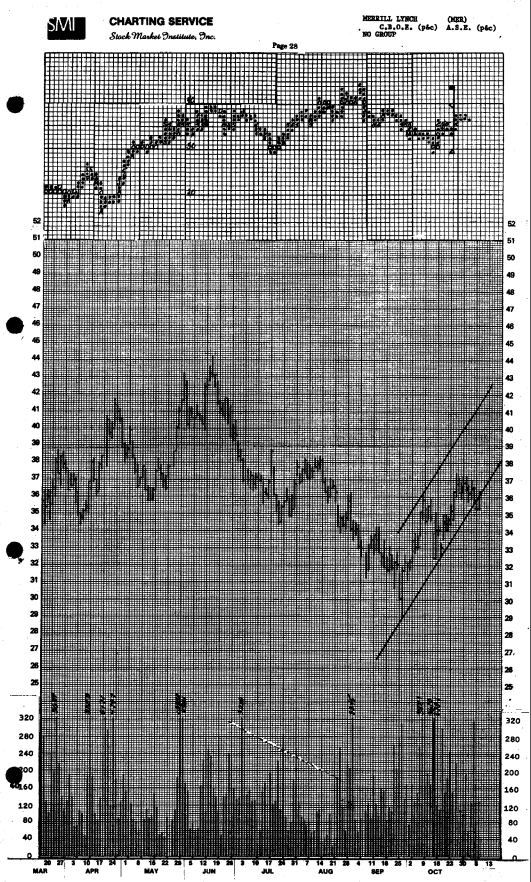 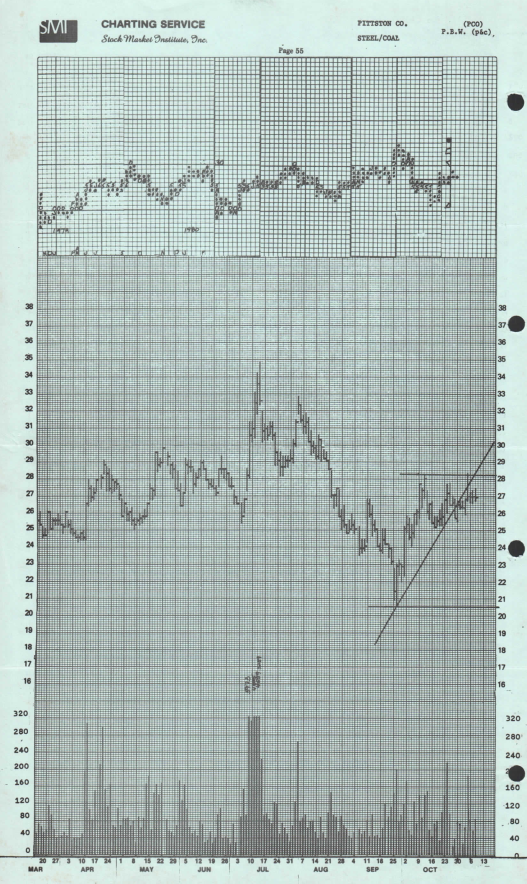